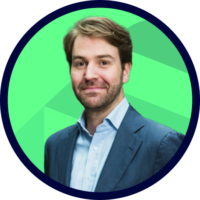 2016, a good and typical financial year in the end

2016 was a good and typical financial year in the end. In our Easyvest portfolios, world stocks rose by 12% while European bonds gained 3%. Yet, the year had begun very badly and was marked by several events with potentially devastating outcomes. Let us review the sinuous course of a normal financial year. 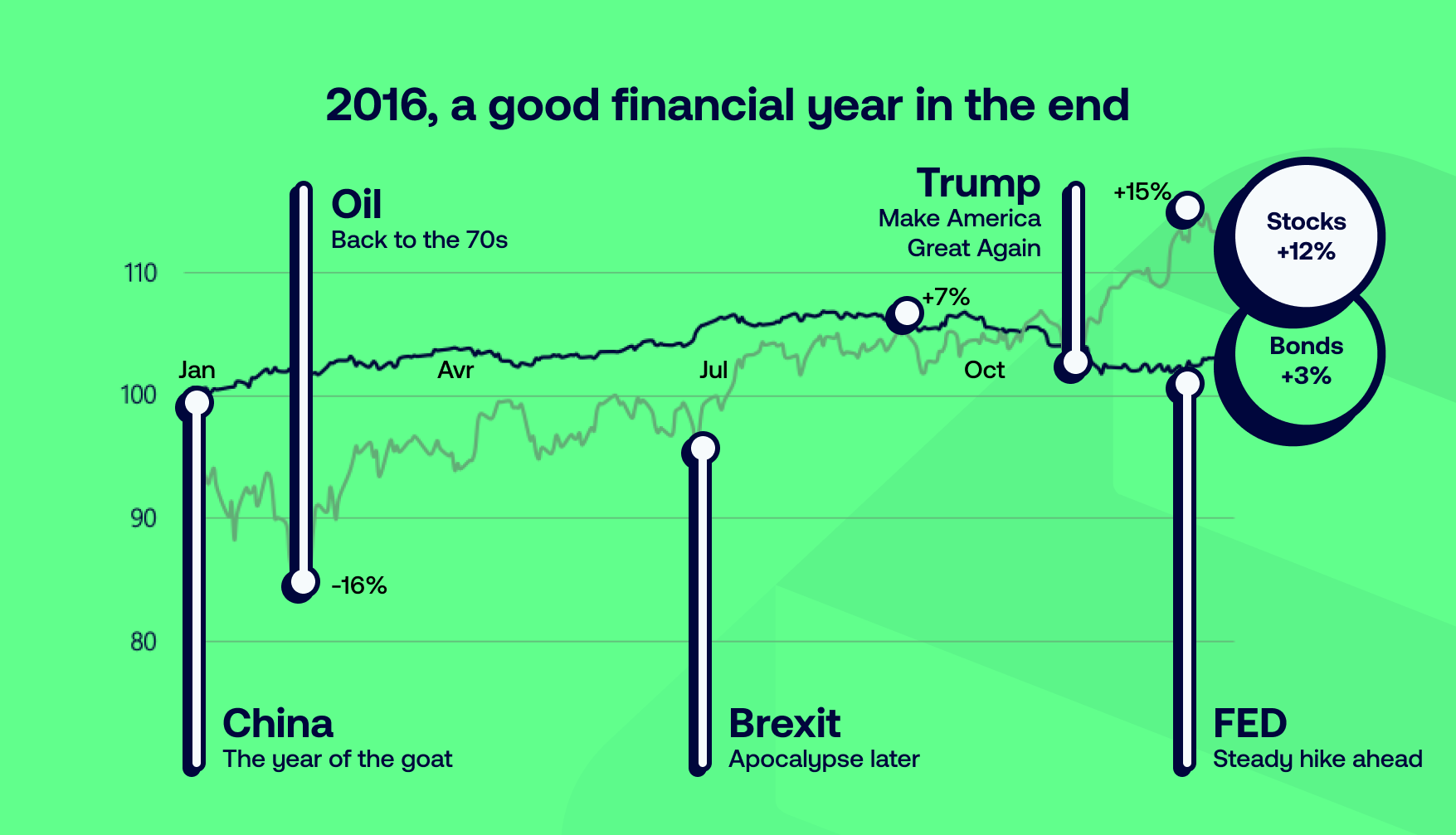 A Quite Good Performance

Never had a year started so badly, markets were down by 3% at open on January 1st. Dragged down by worries about Chinese growth, the investor began 2016 with fear. The economic media stated were already reporting that it was the end of rising markets and the beginning of a long period of recession.

At the beginning of February, everyone seemed to have capitulated and put set aside their expectations of a positive return in 2016. The gurus of the financial apocalypse were already fulminating, claiming that their predictions, hundred times repeated, were finally materializing.

Eventually, the market lost only 16% at the beginning of 2016. If the fall was brutal, a drop of such magnitude is a frequent financial event which occurs on average every 3 years. Nothing abnormal for the one who is prepared and can bear it. During this period, European sovereign bonds gained 2%. Thus, a balanced portfolio (50/50) had only dropped by 7% at the worst moment of the fall.

Once the storm was over, markets started to rise again. Anxious, they always kept an eye on the next potentially devastating event. First the Brexit in June, then the American election in November, while all along keeping an eye on the sword of Damocles of rising US rates.

One after the another, catastrophic scenarios materialized but the market kept rise, contradicting all journalists, economists and fund managers. World stocks finally ended the year up 12% while bonds gained 3%. This result is quite normal, even honorable when compared to the 8% expected average return for stocks and 3% for bonds. Let's look at the events that shaped financial market in 2016.

Due to time zones, the financial year starts in Asia. While we were ready for a new start in 2016, Chinese markets had not yet turned the page of the year of the goat and were about to drive us nuts. Indeed, recent economic indicators published on 31 Dec showed that Chinese economy was deteriorating, dissipating any hope of recovery in China.

Nothing more was needed for the Chinese financial market to start the year with an unprecedented drop of 8%. All markets around the world followed the same trajectory for 6 weeks. Only a rebound in the oil price managed to stop this tumble.

This decline was due to the slowdown of global growth, the development of renewable energy, the growth of shale gas and the inability of the Organization of Petroleum Exporting Countries (OPEC) to agree on a reduction in production.

Low demand and excessive supply could only lead to price decline. The relief ultimately came from a statement by the UAE Minister of Energy regarding an OPEC agreement on a reduction in production. This agreement did not materialize until end-2016, but its prospect was enough to reverse the steam and revitalize financial markets.

Months passed and potential black swans kept showing up. Investors had just recovered from China and oil crash when a new earthquake was about to strike across the Channel. The idea of a vote in favor of the Brexit was tetanizing markets. From April to June, world stocks had a rollercoaster ride paced by the latest Brexit polls.

On June 24, Europe awoke with an imperial hangover. Nigel Farage was triumphant and David Cameron resigning. The stock market was reliving the financial crisis of 2011.

The significant decline of the first day was soon followed by an upward move. After a week, global stocks had even recovered their losses. One should not have been surprised, Brexit had implications only for Europe, and no real consequence in the short term. It was at most the beginning of a 2-year process that would see a skeptical Member State walking away from the European project.

Since Brexit was finally a non-event, all eyes quickly turned to a bigger show: the American presidential election. Who else than Donald Trump, central character of the extravagant American show "The Apprentice", could win this US election progressively turning into a reality show.

He had nevertheless always been perceived as an outsider. When he announced his candidacy, no one took him seriously; A month before the elections polls forecasted he would lose by a large percentage; And on election day, even he did not believe it. Unexpected winner, Trump had actually managed to taken advantage of the media to win the popular vote.

To most economists, a Trump victory was highly unlikely and its consequences would be detrimental to financial markets. Once again, we observed exactly the opposite. While financial markets were very volatile on the day following the election, this turbulence soon gave way to a wave of optimism driven by the expansionist economic policy promised by Trump. During the three weeks following the American election, markets soared 7% while the US dollar strengthened to a new record.

After having maintained its rates low since 2009, the Federal Reserve (Fed) finally decided to raise its rates by 0.25% in December, and disclosed its intention of 3 similar rate hikes in 2017.

Many saw this as a threat to financial markets. Indeed, rising rates imply lower bond prices, and lower stock prices by substitution effect. Some tend to forget that an increase in rates is most often the consequence of a strong and dynamic economy.

Indeed, the last rate hike wave from 2005 to 2007 remains among the most prosperous financial periods of the past 15 years. Although the current rate hike is limited to the US, it does affect European bond markets. Indeed, world bond markets are somehow connected and US monetary policy will sooner or later influence that of Europe.

2016 was a good and usual financial year, with some volatile events and a temporary decline exceeding 10%.

Despite this usual character, one could easily have been influenced by his emotions, have sold his portfolio in the aftermath of an election, or postponed the moment to invest, markets being either too nervous or too high. Once again, a systematic approach with a long-term vision was the best way to operate.

easyvest's portfolio finally returned 12% for world stocks and 3% for bonds. As in 2016, easyvest team will support you in 2017 to help you invest and keep calm in turbulent times.